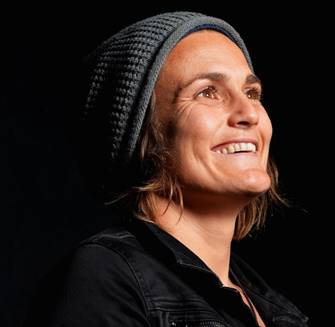 A Talk about sports, identity and life beyond the professional career.

Both Nadine Angerer and Joanna Lohman have celebrated legendary successes in sports and set standards with their careers. Marcus Urban played with the East German national youth football team.

Joanna Lohman,
is a former professional soccer player and member of the United States Women’s National Team. Off the field, she is author of the newly released, „Raising Tomorrow’s Champions,“ an extraordinary parenting and life lessons book as told through the eyes of the greatest women’s soccer players of all-time. She is also a professional speaker, human rights activist and a Sport Diplomat traveling the world running programs in less developed nations. She strives to live an unabashedly authentic life based around deep-rooted acceptance and helps others discover a comfort in their own skin.

Nadine Angerer
played top-class women’s soccer for more than 20 years and made stops at numerous top national international clubs. She spent almost as long as a goalkeeper for the German national team. In 2015, she ended her career as a player, crowned by a multitude of successes. Since 2016, Angerer has been passing on her experience as a coach to young talent and has also been extremely successful in this position.

Marcus Urban
played with the East German national youth football team and in the second division club Rot-Weiß Erfurt in the 1980s and early 1990s. Several years afterwards he came out as a gay man. He has spoken publicly about the difficulties that gay footballers experience, and he is now a spokesperson and campaigner on diversity issues in sport and the workplace.